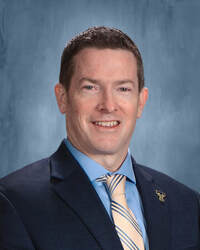 ​Don’t limit yourself to “inside the box” thinking. Look “outside the box” and if necessary, be willing to blaze a new path if it is indeed best for all kids!
​
DO VS. DON'T, CAN VS. CAN'T, WILL VS. WON'T!

Coach Reggie Glon will be moving from Indiana, where he is a member of the Indiana Football Hall of Fame (inducted 2018), to the Downriver area to become the new Head Football Coach at Trenton High School.  Mr. Glon graduated from Indiana University in 1992 after serving his country as a combat engineer in the United States Marine Corps for 8 years. Coach Glon has certifications to teach both Social Studies and Physical Education. He also holds a Master Degree in Sports Science.

Coach Glon started his football and teaching career at South Bend Washington H.S. where he was an assistant coach for 8 years.  He moved to Marian H.S. in nearby Mishawaka where he served as the Head Football Coach for 24 years. During his time at Marian his teams had 6 sectional championships, 4 regional championships, 2 Northern Indiana Conference championship and had 2 undefeated seasons and 19 winning seasons.  He was named the Region 2 and State Class 3A coach of the year in both 1999 and 2015 and coached the Indiana North All Stars in both 1998 and 2013 in the annual football coaches All Star game. Coach Glon has coached numerous players who went onto college football careers as well as several who were able to make it to professional football.

Coach Glon served as a teacher and then both an Athletic Administrator, and Facilities Director at Marian during his tenure there while also coaching wrestling, swimming, and track at various points in his career.

Coach Glon will move back to Michigan with his wife, where they both have family. While his grown children are in different areas of the country starting their own careers, Coach Glon will become the new Head Football coach and will join the lineage of coaches like Farrar, Castignola and  Bob Czarnecki who recently retired after 30 years.